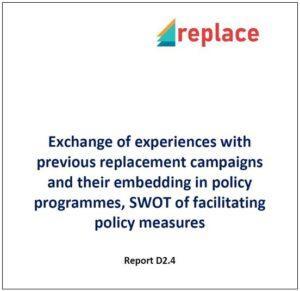 Report D2.4 shows an in-depth overview of the work that has already been done on national and local level in order to replace inefficient heating and cooling systems. It includes 22 campaigns for the promotion of heating and cooling equipment that took place inside the REPLACE regions, plus five more campaigns that occurred outside the target regions.

Replacement campaigns inside the REPLACE target regions show a variety of different targeted approaches that strive to the same goal. From the aim to directly targeting the replacement of inefficient equipment or indirectly with basic promotion of energy efficiency through open door day’s events or general financial incentives on either national or local level. Core campaign approaches are depicted in the report. REPLACE campaigns will build on already carried out campaigns inside and outside REPLACE target regions.

Project information in your language!