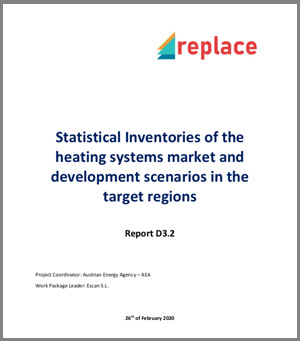 How do people in the REPLACE regions heat and cool their buildings today? And what potential for climate friendly replacements is there in the future? Based on the data available for a base year, the REPLACE team has developed three scenarios that describe the impact of the REPLACE project: In the number of boilers and homes replacing old inefficient systems by new sustainable ones, as well as the energy savings, CO2 emissions reduction and level of investment triggered.

The three scenarios cover a business as usual, an optimistic and a pessimistic REPLACE scenario. The scenarios in Report D3.2 refer to the overall project as well as the ten target regions from Western over Central to South-Eastern Europe.